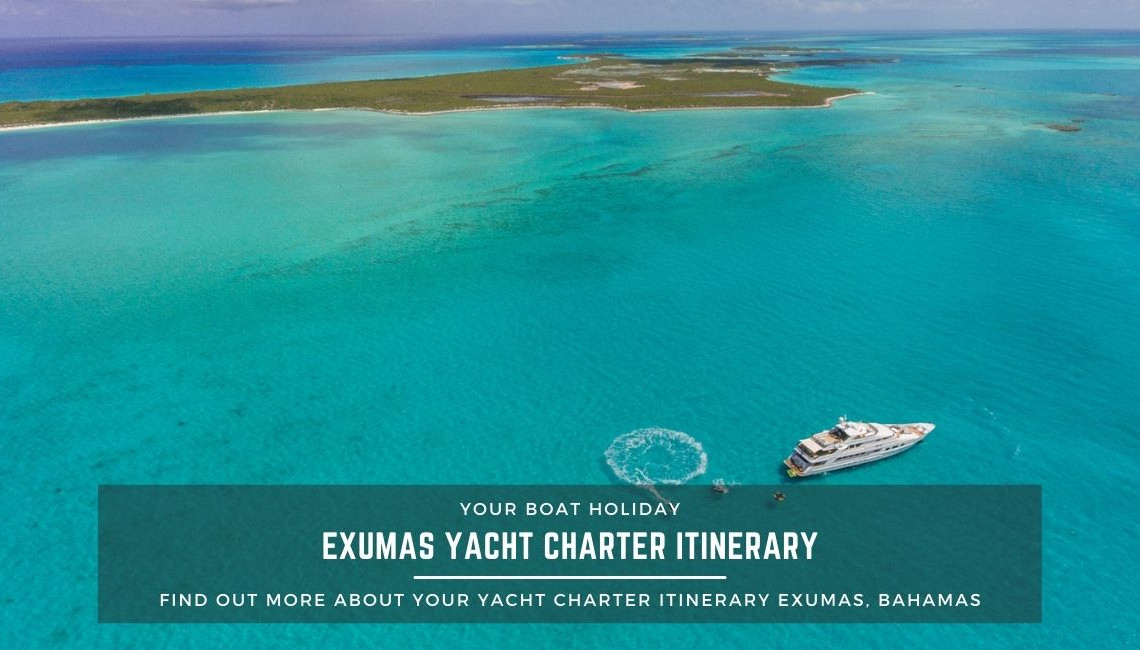 Let’s visit one of the most beautiful archipelagos that make up the Bahamas in a different way, uncommon from the classic tourist routes. Get away from the crowds that flock to the most famous beaches and discover hidden and unspoiled corners of paradise.

You can do this and more on your next yacht charter trip to the Exuma Cays!

What to know about the Exuma Cays?

It is a group of islands that run along an imaginary line that goes from the north (a short distance from New Providence) to the deep south, reaching the Turks and Caicos islands.

However, only three are inhabited and host tourist accommodations: Great Exuma, Little Exuma, and Stocking Island.

The largest is Great Exuma, where the archipelago’s capital city, Georgetown, is also located. This island has many tourism facilities, and you can find white beaches and a crystal clear sea. It is connected via a bridge to Little Exuma Island.

Little Exuma is located on some of the most beautiful beaches in the world, while Stocking Island is the smallest of the three and can be reached by sea from the city of Georgetown.

Exumas offer paradisiacal, wild, and beautiful beaches, ideal for a holiday of absolute peace and relaxation. One of the most particular is Pig Beach, on the uninhabited island of Big Major Cay, a beach that owes its fame to a colony of pigs that populate it.

Near Georgetown is Hoopers Bay Beach, famous for its distinctive crescent shape and white sand. Here it is straightforward to spot groups of sea turtles.

Another fantastic beach is Starfish Bay which is located north of Stocking Island. The beach is wild, characterized by fine sand and a blue sea where you can spot hundreds of starfish.

For those who love diving, the Exuma Cays represent an absolute daydream. One of the best places to admire shipwrecks, swim underwater in a system of splendid caves, and meet a huge number of colorful fish.

The best time to go is from January to April when rainfall is rare and temperatures are ideal for a sun and sea holiday.

10 Days yacht itinerary in the Exumas

If we have aroused your curiosity in you, then take a look below at our 10-day yacht charter itinerary in the Exumas:

Once in Nassau, Bahamas’ capital, after meeting the crew on board, it is time for you to lift the anchor and start your adventure in the Exuma Cays.

Relaxed sailing takes you offshore, heading south. Have a chill on the deck while sunbathing, enjoying a fabulous cocktail, or taking advantage of the water games to have fun with your loved ones.

The first half of your trip immediately takes you to one of the most attractive places: Thunderball Grotto.

On the road from Staniel Cay to Big Major Cay, you will be attracted and intrigued by a small rocky island whose seabed hides a great wonder.

Thunderball Grotto is characterized by shallow water and is made up of a unique system of underwater caves filled with exotic marine life, brightly colored corals, and even hidden entrances that make diving lovers go crazy.

What makes the cave special are its unique interiors and entry points. Swimming through short underwater tunnels, crossing narrow passages with light rays dancing across the island’s hollow interior.

The particular name of this place is due to the James Bond film series. These caves first appeared in the 1963 film called “Thunderball.” He later appeared again in 1983 in a scene from the movie “Never Say Never.”

Capital of the Exuma Cays, Georgetown is located on the island of Great Exuma and is directly crossed by the Tropic of Cancer. About 900 people live permanently in this seaport, a place known to many boaters thanks to two major nautical events: the annual Family Island Regatta in Elizabethtown and the annual Georgetown Sailing Regatta held every March.

Georgetown has an intriguing past. Pirates used its deep-water port during the 17th century, and later, in the 18th century, Elizabeth Harbor became a refitting base for British ships. The United States Navy eventually used the port during World War II.

Shopping is one of the most developed activities here. It includes souvenir shops, grocery stores, and the famous open-air straw market, where locals and tourists can buy straw baskets, pottery, watches, and postcards.

If necessary, the city also has a bank, a service station, a scooter rental, tour operators, and many other shops.

Initially called Fortune Island because when Christopher Columbus first landed there, he found a pearl here; it is known in the Bahamas’ history for being the site of the first country’s prison, whose most of the structure is still standing nowadays.

It was the only entry port into the southern Bahamas and served as the administrative headquarters for centuries. It was also an important commercial center with thousands of residents. It has a tiny population today, sometimes less than 50 people.

During your stay, you can visit the historic churches of St. David and St. Augustines and stop off at the large secluded beaches on the island’s north side, with crystal clear water and clean white sand. You can also spot flamingos gathering on the south coast shores if you’re lucky enough.

During the fifth day of navigation, you will have the opportunity to appreciate a real lost paradise. Born as a pirate stronghold, Mayaguana has become a popular fishing location.

More isolated and less developed than any other island in the Bahamas, this remote island is the ideal destination for the traveler searching for a secluded spot. Whether a deserted beach or a remote fishing spot, the island is the perfect combination of exotic and mysterious charm for a romantic or private getaway.

Over the next two days, you will be busy visiting Acklins Bay and its wonders.

Acklins and Crooked Island have the same natural habitat as hundreds of years ago and are separated by a nearly 1,300 square kilometer lagoon known as the Bight of Acklins. Both islands are a haven for sailing, bonefish fishing, snorkeling, and diving.

We begin the ascent home by navigating north. We still have two days full of adventure in store before returning to Nassau.

We have a stop at Rum Cay, considered one of the most historically exciting and best-kept islands in the Bahamas. It is home to historic ruins, vibrant coral reefs, miles of white-sand beaches, and big waves for surfing.

The abundant marine life attracts fishermen, divers, and snorkelers from all over the world.

Before returning to our departure port, we cannot fail to stop at the famous Pig Beach. It seems incredible, but, in addition to the classic marine life, in the Bahamas, you can make friends and swim with unusual animals in the area, making your experience unforgettable: the famous Exuma pigs!

Immersed in a splendid naturalistic and exotic setting, among palm trees and luxuriant bushes, a colony of these cute animals lives happily at the beach of Big Major Cay.

Nobody knows where they came from or how they got to this desert island. There are many stories and rumors about it: abandoned by a group of sailors, survivors of a shipwreck, or swimming from a nearby islet. The fact is that they seem to have settled in really well, are growing in number, and have even become an international attraction thanks to the numerous videos and photos that portray them on social media.

They will be happy to see you. They are in love with tourists bringing them food, so as soon as they see a boat on the horizon, they swim to reach it, hoping for some succulent bite.

After days spent in serenity and fun aboard your charter yacht, time to disembark has unfortunately come. We are sure that you will take unforgettable memories and experiences with you. 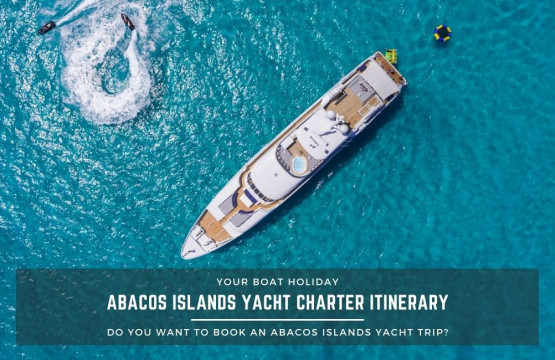 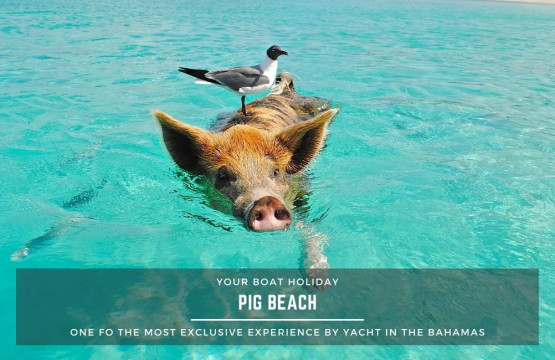 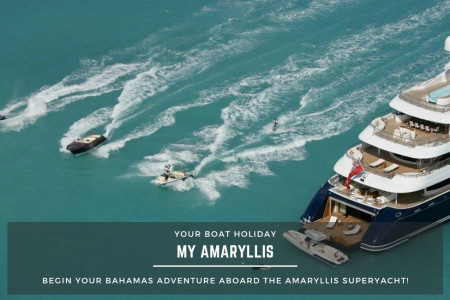 Are you looking for a luxury yacht for your next Bahamas break? Our advice is called Read More 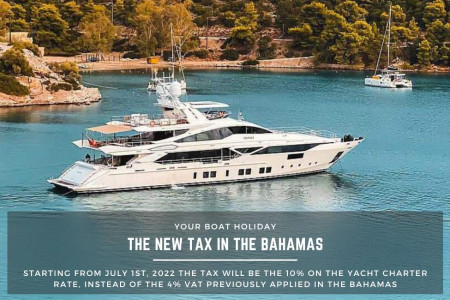 If you are considering a yacht charter vacation in the Bahamas, you will need to consider… Read More 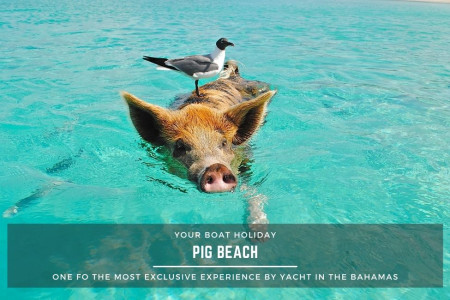 If once you swam with dolphins, today you swim with .. pigs! Don’t you believe it? Come and see it… Read More

Yachts with waterslide for charter in the Bahamas

2 weeks ago by Charter Broker

Are you looking for the funniest... Read More

2 months ago by Charter Broker

Are you looking for a luxury... Read More

If you are considering a yacht... Read More

Register with your email

Please enter your username or email address. You will receive a link to create a new password via email.